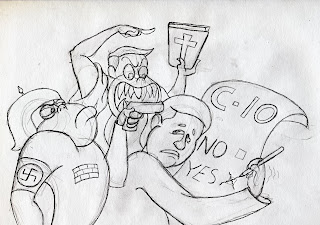 For those who haven't heard about this yet, Bill C-10 is a bill that will allow the Canadian government to deny tax breaks to any film not meeting their standards of decency.  Thankfully, it hasn't been passed yet, but with the amount of pressure being put upon Parliament, it just might happen.
Y'see, there's a evangelical guy working in the shadows named Charles McVety (aka this monkey) putting his grubby fingers all over this bill.  Acting on behalf of CFAC (Ann Coulter's wet dream) he and his flying monkeys will make sure that no Canadian tax dollars fund any films that he wouldn't approve.  Oh well, the CBC and the National Film Board were nice organizations we had once.  It's too bad they both depended on tax dollars for everything they did.  If only every employee had more than two kidneys to sell, they just might have lasted longer. 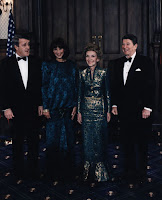 Maybe he'd rather we have someone like Brian Mulroney in parliament again so that our tax dollars could be put towards things like Ronald Reagen's STAR WARS Defence Initiative.  Actually, now that I've brought it up, once these taxes are no longer going towards any films, where will they be going?
If you want to voice your opinion about this bill directly to the people who can have it stopped, send some snail mail to this address:

The Senate of Canada

"But hey!  You're just a blogger, Mr. Germain.  You just post your pictures and type out lengthy tyraids online.  Why do you care so much about this bill passing or not?"

That's a good question, hypothetical blog reader.  I care because I live in Canada and I am an animator/film maker.  I've made only one film so far but I do hope to make more.  However, that road to getting enough financial backing to make any films will be much tougher if the bill passes.  Heck, the veterans of the Canadian film and television industry are going to have tougher times ahead.  It'll be damn near impossible for upandcomers like me as well as anyone behind or slightly in front of me.

With that, I'll leave you with a copy of my film.  Do you think McVety or anyone in his corner would give any tax dollars to it?  You be the judge.