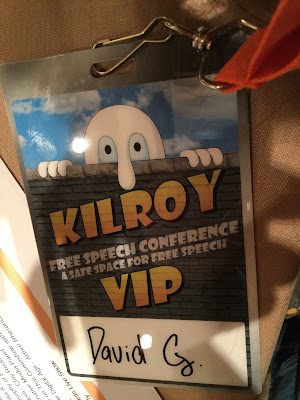 Yes it did and I was there.  Since I've been enthusiastic about since it was first announced and did not just one but two blog posts about it when everyone was full of optimism about it (as well as one after shit was hitting high-powered fans everywhere), I should complete my mission and talk about my experience there. 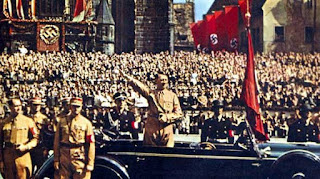 It started with a huge speech by someone who kind of looked like Charlie Chaplain a little bit. I think his name was "Randolph" and I think I remember him talking about how he "hated Joes" or something.  Sucks to be Joe I guess. Everyone else there claimed that they 'see Kyle'. Maybe that was the name of the guy at the front doing all of the blah blah chu chu? I was way in the back. I couldn't really see or hear much. "What? Blessed are the cheesemakers?" 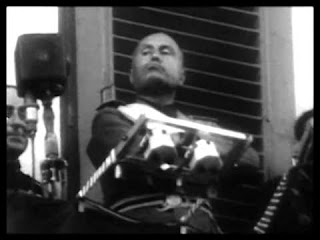 Then some guy walked out onto a balcony and made great big speech about himself. I couldn't quite understand him because he had such a thick Italian accent.  He sounded pretty sure of himself though. 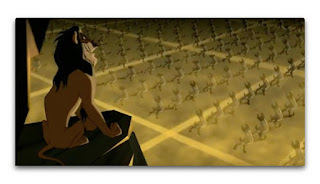 Next a lion and a whole bunch of hyenas sang a song to us about the importance of being prepared. That was fun. 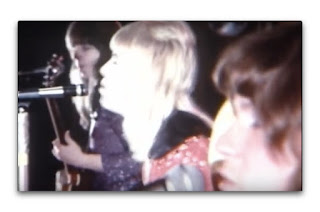 Then a man in the back said, "everyone attack" and it turned into a Ballroom Blitz!

Ha ha ha!!! No, none of those things happened. I'm just funnin' with ya!  What did actually happen was a series of lectures and panels espousing the importance things like free speech, free expression and alternative media.  It was one of the least safest spaces full of microagressions as well as toxic masculinity/femininity and it was GLOOOOOOOOOOOORIOUS!!! 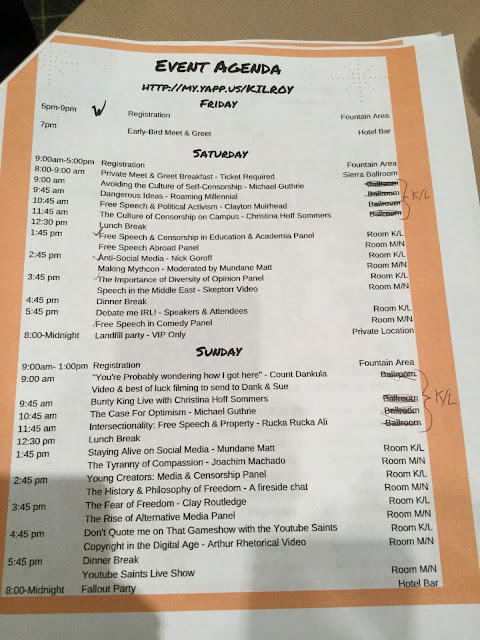 As you can see, there is a wide range of topics and issues to discuss. 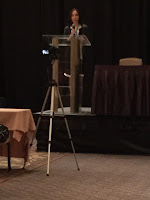 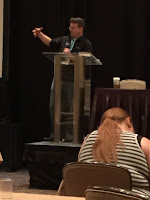 I did see improv guru Michael Guthrie talk about avoiding self censorship.  I agree.  He also made a speech the next day about staying optimistic in what looks like bleak times for free speech. For sure it's important to keep optimism if for no other reason than to just keep yourself in the fight so that you never give yourself to those who wish to control you.  I also sat in for Roaming Millenial's speech about dangerous ideas.  I agree with everything she said in that speech too. I'll post more about that later on.  For whatever reason, I think Clayton Muirhead couldn't make it so his speech didn't happen.  Oh well, that left more time for the one and only Christina Hoff Sommers, a veteran feminist from the '60's, to give her speech about the current state of feminism.  She talked both about her experience of having her speech interrupted by angry students at, of all places, a law school as well as speeches being interrupted and even shut down entirely in other places of learning to other people.  Needless to say, she is not happy about that one bit and sees this as a disturbing slide toward fascism which these student protesters seem to be leading.  She was later interviewed by Bunty King where she reiterated those same concerns to him. 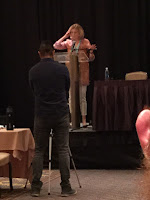 I sadly didn't get a chance to meet her and discuss these issues or even show her my book.  Regardless, I'm sure she knows that her words and speeches are appreciated by attendees of Kilroy as well as people all over the world.  I'd say that for every one fanatical SJW who wants to shut her down there are at least three open-minded people who want to hear everything she has to say.  I for one hope she never stops spreading her word. 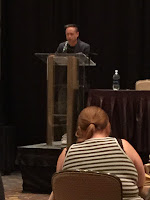 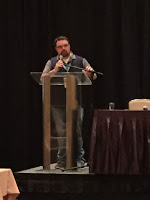 Youtube veteran Mundane Matt gave his own speech and was party to many panel discussions as well.  His big talk was about how to stay alive on social media in these times when the entourages of @jack and/or Zuckerberg could ban you from their sites at any time for any reason.  Oddly enough though, Matt, as well as another speaker whose online name is Rucka Rucka Ali seemed to be on @jack's and Zuck's side a little bit in this regard.  Rucka went into much more detail about his position in his talk Intersectionality: Free Speech and Property.  The position they both had on this point is that social media platforms, like Facebook and Twitter, are private companies that can run their businesses however they want.  They both scoffed at the push for turning social media platforms into utilities like electricity and water are because that would simply move the power of banning social media users from private business owners to the government.  Of course, any libertarian-leaning people who also advocate for absolute free speech everywhere also advocate for as little government interference as possible.  In this same vein, Rucka Rucka Ali also had a problem with the Equal Employment Opportunity Act passed during the civil rights era.  He felt this was the government interfering with private businesses and thus that made him feel uneasy.  Feel free to discuss this topic in the comment section below if you feel the need to. 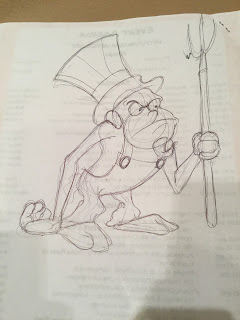 Oh hey. I even managed to make a quick doodle on the back of my program while waiting for one of the speeches to start.  For some reason I always gravitate toward the American Monkey first when I think of my Censor Monkeys.  I don't know why.

Anyway, it would be pretty dry of me to just go on about all of the speeches made at Kilroy though. Now I'll show the people I met there: 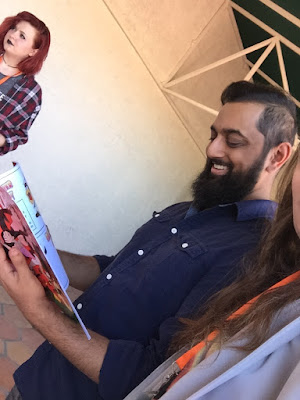 Bunny King for one.  He's a marketing guru who's been kicked off Twitter more times than ISIS.  Here he is holding and reading my book.  I wanted just a shot of him with the book but he wanted me in the shot as well.  So, be both compromised and got this oddly framed composition.  Ah well. He's a fun guy to be with. Everyone in the world should meet him. 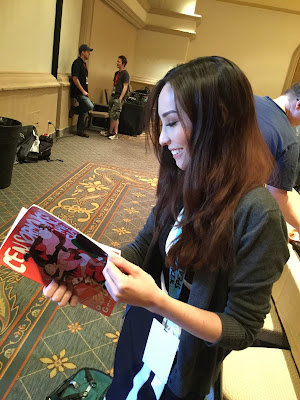 I also had the good fortune of meeting Roaming Millenial and showing her my book.  This girl is tiny.  She is built like Olive Oyl.  She has to run around in the shower just to get wet.  She could use a  shoelace as a sleeping bag. If she's not careful, two Disney dogs could end up slurping her up at both ends. I've done enough body shaming type of 'tiny & skinny' jokes here.  The rest of you can make up your own. 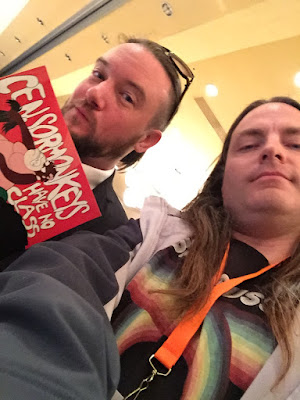 I also met and showed my book to Jeff Holiday. He was there to help moderate many of the panels at Kilroy.  He's been making career online, mostly on Youtube, for the passed several years now.  He's the one who set up and organized that What Is Kekistan video of which I was happy to participate. 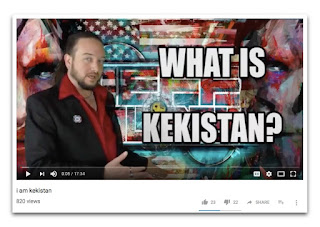 Jeff is one of the nicest and most outgoing people one could meet. I hope everyone in the world gets to meet him someday. 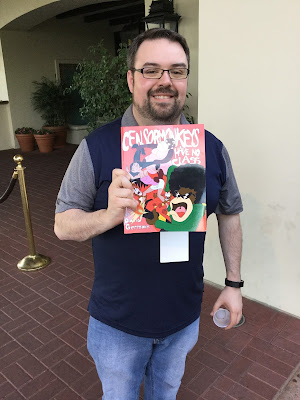 I also managed to meet and show my book to the nam himself, Mundane Matt. He's also made a nice good living posting self made videos on Youtube and was one of the people who inadvertently spearheaded the saga that came to be known as #GamerGate.  I had sent him a copy of this book some months ago and he recognized it. He even told me that he had even recorded a video talking about this book and would be uploading it at some point.  When he does, I'll absolutely share it everywhere.
He's also a super nice approachable guy who could talk about movies for hours.  I hope I get to meet him again in the near future. 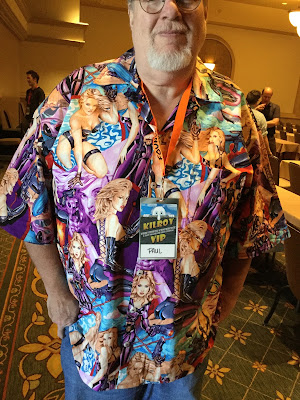 I also met this guy wearing a shirt full of sexy ladies.  I forget his full name but he told me that he is one of the producers for that documentary film The Red Pill Movie. 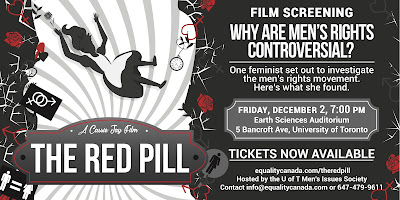 For those who don't know, this a documentary made by a feminist Cassie Jay.  When she started making this film, her intent was to expose the Men's Rights Movement as deeply misogynistic in the hopes of shutting them down.  However, upon listening to their arguments carefully, she found her self agreeing with all of their points and even supporting them.  She found them to be anything but misogynists, even fighting for the same equality that she and her own feminist ideals were trying to achieve. Similar to the experience of Christina Hoff Sommers, this film has been met with huge backlash from SJW feminists and has had screenings cancelled because of the angry protests.
This man confided in everyone that Cassie Jay herself wanted to attend Kilroy but couldn't make it for personal reasons.  Oh well, hopefully she can come to Kilroy when and if it's held next year.

And it should be held next year, and the next year after that, and another after that and so on. There should maybe even another one like it held this year.  It is more than imperative that this should be done.  Remember the original onus that inspired the creation of Kilroy in the first place.  It was born out of free speech advocates who are completely frustrated by the setup at venues like Vid Con where the ones who push that SJW narrative such as the likes of Anita Sarkeesian are given a big stage and a microphone to free give her point of view.  Meanwhile, open critics of that narrative, such as Sargon of Akkad, are regulated to audience members of that stage.  Sadly, it looks like that's as big a compromise as the event's organizers are willing to make.  Kilroy was meant to alleviate that unbalance and give the critique of narratives equal opportunity to be heard.  We need more speeches like the one Roaming Millennial made at Kilroy:

She's posted the entire speech on her channel so you can go there to see the whole thing.  Rather than post that entire speech here, I'll just go ahead and post a link to her entire youtube channel.  It's all good. She has wisdom well beyond her years. Whether you agree with her positions or not, you will not be disappointed.

Anyway, Kilroy was fun. I don't regret going there. I'd gladly go again if I could find the time and money.  For the preservation of free speech, free expression, and 'free to be decadent' western ideals in general, Kilroy must happen again and again and again.  Here's hoping I see all of you Keks and more next time. 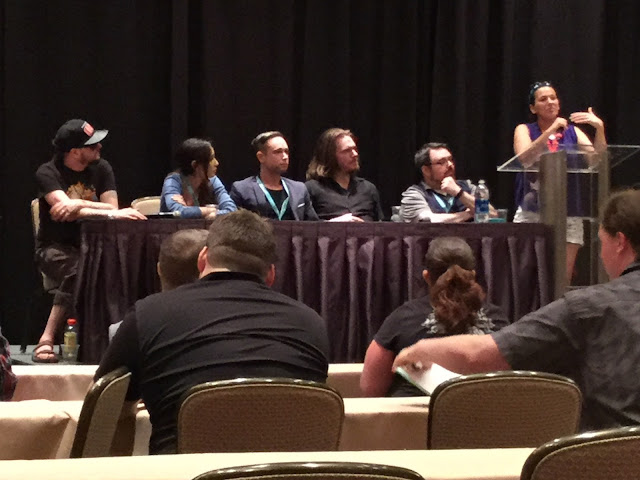 Posted by David Germain at 2:56 PM No comments: Links to this post