What is the Rainbow Connection?

It's my birthday again.  That's means that for my own indulgent pleasure (and possibly yours too) I will give my take on something in this world.  In years passed I've done that for:

This year I will be talking about that seminal classic that everyone who's ever put their hand into a ball of cloth and manipulated it to amuse themselves and others knows: Rainbow Connection from The Muppet Movie

{Author's note: If anyone reading this post has discovered this rainbow connection already, or if Paul Williams himself has found this post and can offer his insight about the lyrics to this song, definitely feel free to leave a comment telling me what I got right and what I got wrong.  Everything I'm writing here is observation and not a stone cold fact.  I am open to discussion.}

As one can hear within the song, Kermit refers to this "rainbow connection" as something we don't know and as something that someday we will find.  Of course, in order to find something, one must begin looking.  That's simple and straightforward enough.  However, where would someone START looking for this connection?   I think I know where to start looking.

First, we must examine the rainbow.  For more than a few millennia, going back to when humankind was just blob fish with legs slogging along the earth's surface, we have been fascinated by the rainbow every time it has appeared.  Primitive man had no resources to even fathom what this giant band of colour in the sky was or how it got there.  In biblical folklore, it is said that God put a rainbow in the sky right after the giant flood as his way of telling Noah that He will never flood the Earth in that way ever again.  In Irish folklore, the end of a rainbow is said to be where leprechauns keep their gold.  That was mankind's first attempt at rationalizing the existence of rainbows.  It wasn't until the year 1307 AD that a German scientist named Theodoric of Freiburg discovered that rainbows can be created by shining light through a prism shaped shard of glass or a similar translucent surface such as water.  When a beam of light shines through such a surface it breaks up into the sex basic colours: RED, ORANGE, YELLOW, GREEN, BLUE, and PURPLE.  That's how a rainbow forms in the sky, sunlight is reflected and thus broken up through all of the water left on the ground after a good rain. 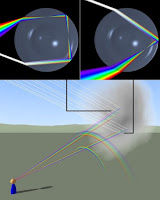 Our more scientifically sophisticated brains understand this now.  However, whenever a rainbow appears in the sky, to this day, everyone still gazes in awe at its magnificence.  We know exactly how a rainbow comes to be made and yet we are still amazed whenever we see one.  Why is that?  What is the big draw?  As Kermit sings, "what's so amazing...?".
This ties in with what happens to Kermit right after he's finished singing his song.  A man, played by Dom DeLouise, comes rowing by in a boat and tells Kermit that he's an agent in Hollywood. 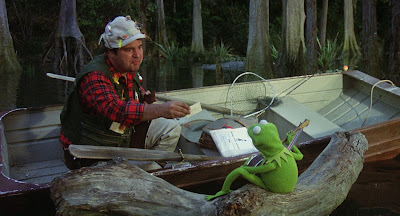 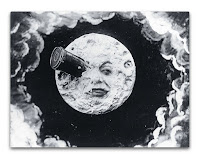 From that point on, Kermit's main goal is to get into the movie business, or as they sing later in the flick, to "have a home at the magic store".  That right there is the connection.  The entire movie is making the rainbow a metaphor for movies.......... well, entertainment in general really.  Pretty much ever since George Melies took men on A Trip To The Moon in 1902, people have been fascinated by the magic of movies.  Since then, the cinema-going public has been dazzled by a giant gorilla on the Empire State Building, Moses parting the Red Sea, a young farm boy in outer space teaming up with a bounty hunter, a princess, a wookie and two robots to defeat an intergalactic villain that turns out to be his father, a land of tall blue people being ravaged by humans, and countless other special-effects extravaganzas.  People have also been dazzled by something simple as a mouse whistling a tune as he powers a steamboat. 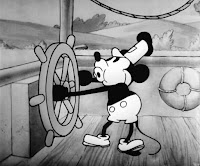 For decades, we just sat back and enjoyed everything (well almost everything) we've seen on the big and small screens.  As our fascination for this industry grew, we began to see many 'behind the scenes' footage of these movies being made.  I think it was first done in 1968 when Hollywood would put smaller cameras on top of their large movie cameras so that candid footage of a real movie set could be captured and shown to the general public.  It still continues to this day.

That video above shows all of the technical elements to was used to make the movie Alita: Battle Angel what it is.  We know how it's all done now.  However, does this ruin our enjoyment of it?  Well here are its box office results so you tell me. 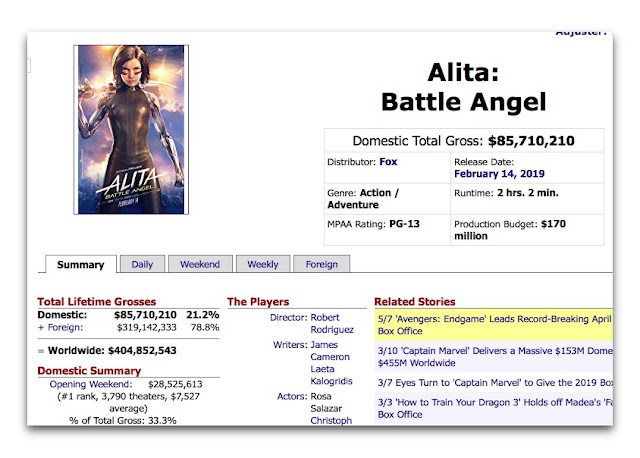 You see?  It's just like the rainbow.  Even after we've been shown how a movie is made, we are still enthralled by that movie.

It's not just like that in movies that require blue screens and so many computer graphics and/or animatronics to bring a story to life.  I'll use as an example something I was in, Lizzie Borden Took An Axe.  You can read my blog post that I made at the time right here.  Below I've embedded the big verdict scene from that movie.

It looks like that scene was shot on a bright sunny morning, doesn't it?  I think in the original history, the verdict was read at about 9:00 AM.  However, I was on the set that day and I can tell you what time it really was when we shot that.  It was midnight and outside was pouring rain.  They managed to made it look like a calm sunny morning, however not by computers and not simply through the camera's lens.  On the set it looked exactly a calm sunny morning.  All of us background extras stood in a weird state of disbelief.  We looked at our watches and/or our devices and saw "yes it's 11:59 PM" but in that room it looked like the morning.  Our bodies were even quasi adjusting themselves to feel like the morning.  We knew we should be going to bed soon but we also had this weird feeling of "it's time to start the day".

That, I believe, right there is the rainbow connection.  The same way we gaze in awe at a rainbow no matter how sophisticated and evolved we are, so too do we constantly gaze at the little universes created by the magic of movies no matter how sophisticated and evolved we are.
Just watch this clip below of Jim Henson on Dick Cavett's show.  He lifts a limp Kermit puppet up from behind a wall and then proceeds to put it on his arm, in full view of the audience.  Then when Jim makes Kermit talk you can see his mouth moving.  And yet, Kermit looks and feels very much alive the entire time.  How did that happen?  That's the magic of the rainbow.

Will we find this elusive rainbow connection? The lovers? The dreamers? You?  Well, that's up to each individual whether they want to look for it or not.  As for me, I'm going to keep enjoying rainbows and movies until my last dying breath. 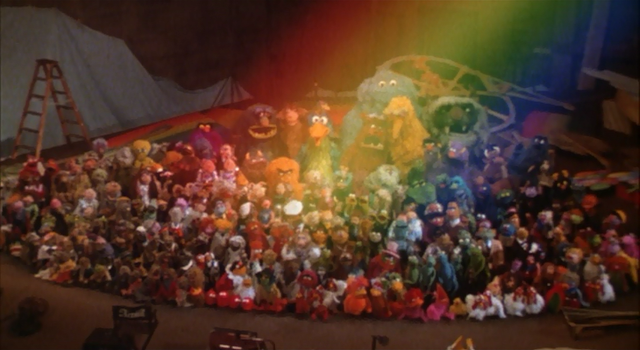 Posted by David Germain at 4:30 AM No comments: Links to this post