Yeah, that's right. Rush Limbaugh dropped by book as a sponsor after going into a childish rage after reading one angry letter. He even says in that clip he didn't even read the book. He only took the word of some cranky old lady. How typical of his kind of egocentric maniac. I never should have approached him for sponsorship in the first place. Oh well. Live and learn.

Posted by David Germain at 8:52 PM No comments: Links to this post

Rush Limbaugh has a new sponsor for his show.

What will the liberal illuminati make of this? >:P

Posted by David Germain at 8:19 PM No comments: Links to this post

On April 6th, 7th, or 8th, you'll be able to download the kindle version of my book Jesus Needs Help at this link here: http://www.amazon.com/Jesus-Needs-Help-ebook/dp/B005HQKOLC/ref=pd_rhf_dp_p_t_2
Or, if you like, you can right now purchase the paper version of the book here just like the distinguished gentleman below. 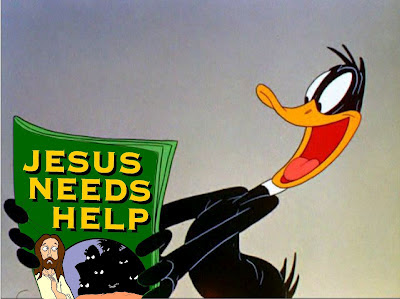 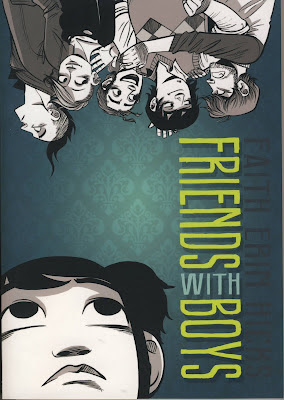 On Saturday, March 10, I had the pleasure of being in Strange Adventures in Halifax and stood in line to purchase a new graphic novel from Faith Erin Hicks. It's called Friends With Boys. She even autographed my copy and made a nice doodle in it too. 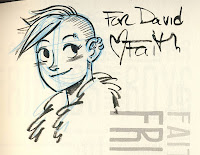 That's a character from the book. Her name is Lucy. She's the kind of girl who likes to make a bold visual statement and really doesn't care what anyone thinks about that. Although, she does feel the need to hide behind the "tree of shame" at one point.
But she's not the main focus of the book at all. The story centres around a young teenage girl named Maggie. She's the youngest of 4 children, 3 boys and 1 girl. All of them were home schooled until they were old enough to enter high school. This year, it is finally Maggie's turn. Yes, she is definitely scared almost to the point of a nervous breakdown. 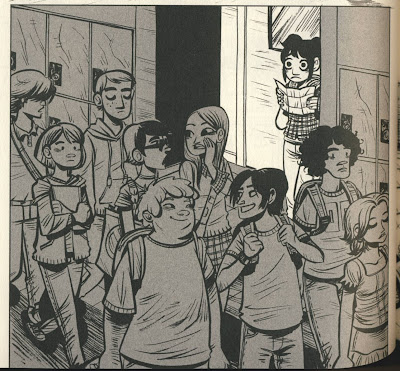 Can you really blame her? High school is really alot like a war-torn third world country. Everyone is a uncivilized insecure idiot looking for a king to lead them. But not a king in the sense of appointed royalty but more-so like someone who appears all powerful. They will do anything to appease that king (or queen, or both) and anyone who fails to do so is subject to any manor of physical or psychological torture. 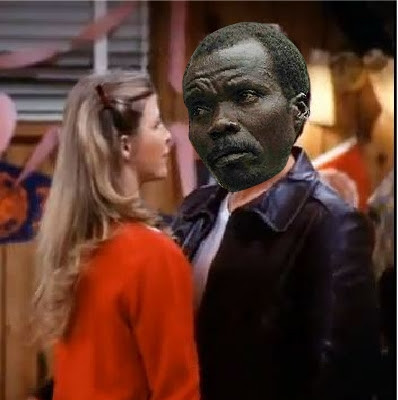 Oh, Kony, you're so cool.
The book certainly has a character who is exactly like that. His name is Matt. 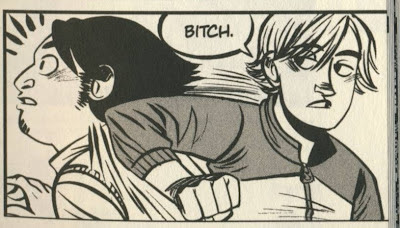 Yeah, the asshole jock who "rules the school" is kind of a cliché in high school stories. But, it's only a cliché because it's true.
I think the book does certainly work as a whole. The story flows along at a nice pace. I stayed involved with the characters all the way through. I never once got confused about anything. All the information necessary was presented very clearly. It kind of felt like an episode of Degrassi High to me. That's probably because this book's author is Canadian. That makes the most sense.
I also like how she incorporated actual Halifax locations into the story, like this one below: 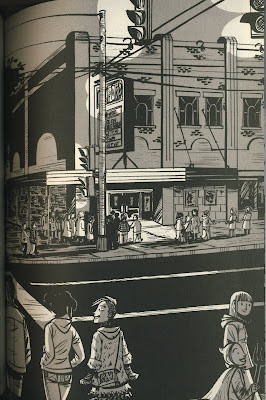 I love the Oxford Theatre on Quinpool. It's what movie houses used to be, and really how they should still be. It has very elegant decor made to look like only the best and brightest people go there, not like today's theatres where they're all streamlined to look like tacky spaceships meant to babysit your annoying kids.
Actually, that shot of the Oxford brings me to another great aspect of this book: the artwork. Normally I'm not a fan of the faux-anime style. But, that's mostly because too many young artists are drawing that way these days. After seeing it so many times, it gets rather tiresome. But, none of that matters if the artist has the basic principals of drawing and composition down. Faith Erin Hicks certainly has that.
I'm very impressed with the inking. I saw her draw that doodle in the book for me right there in the store. She is very skilled with the brush and ink. Pretty much every panel in this book is a joy to look at for that reason alone.
There are also some very good facial expressions in this book too. We really do get a sense of what or how the character is feeling. They're not just stiff entities that just lie there flat on the page. She definitely knows her stuff.
If Star Wars has taught us anything, it's that for every bright side, there is a dark side. A review with only positive things to say would be rather incomplete don't you think? So, with that in mind, I will go over a few nit-picky things about this book that I didn't like.
I have a small problem with this panel here:

I can kin of see that Faith's trying to show that the character does a small shrug. For me, this doesn't work. It looks like she had trouble rendering that and so just copped out and put the action work beside the body. Could you imagine if an entire story was like that? 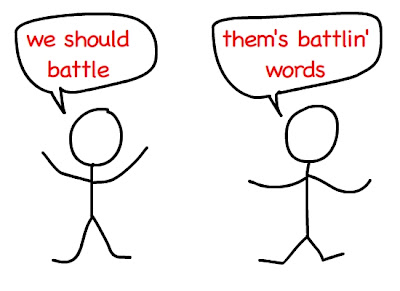 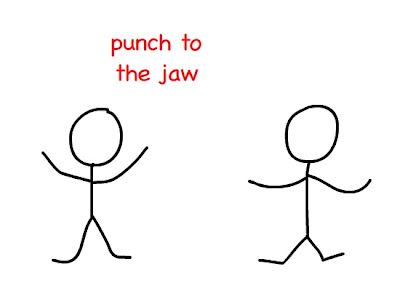 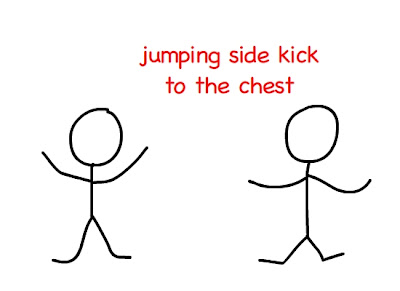 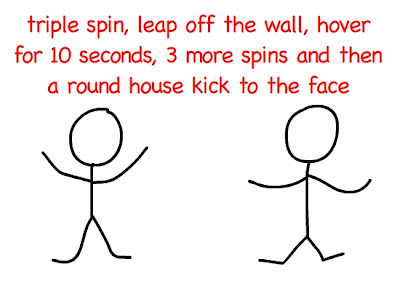 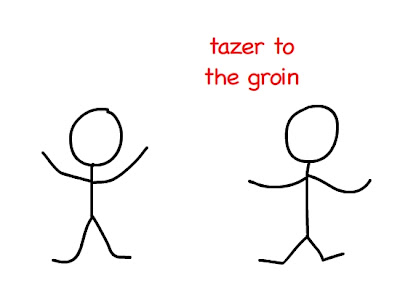 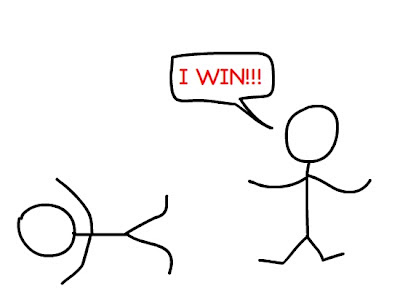 Wow! That's quite an exciting scene there. I think Faith would have been much better off if she just drew Maggie in mid-shrug. That would have gotten the point across much better. In my book, I drew Jesus doing a shrug in exactly that way. I think it comes across pretty well. 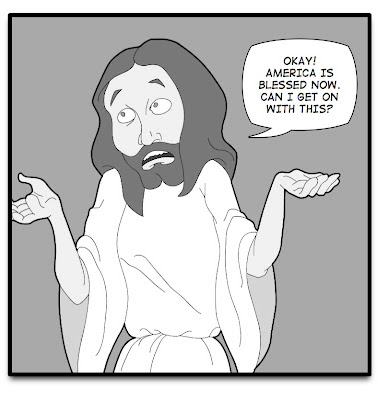 Here's another part of the book I really didn't care for at all: 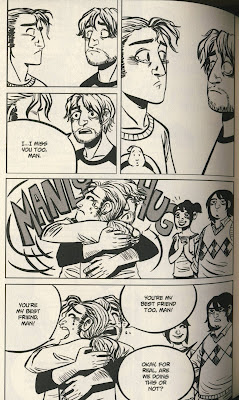 In the book, there's a substory about Maggie's older twin brothers always fighting. Near the end of the book, this resolution was shoehorned in just so that all the elements of this book have a happy ending. Not only is this pure cheese, it would be better if it were unresolved, at least at this point. These twins' conflict could easily have fuelled another story with these characters. There would have been more room to explore this conflict and enough time for it to come to a more satisfying resolution. Here it's just tacked on unnecessarily and does nothing to support the main story anyway.
But, that's just two little nitpicks in an otherwise delightful graphic novel. I picked it up for about $16.89 Canadian. If you haven't bought your copy of her book yet, I suggest that you do so. Besides reading a great story, you'll also help support an artists in this harsh economic climate. If you can't find it in stores, you can definitely order it on Amazon here.
Posted by David Germain at 10:58 AM 1 comment: Links to this post