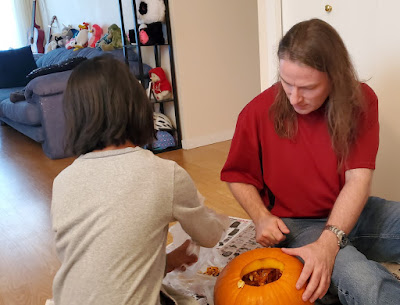 Here's me and my daughter carving a pumpkin together. I'm showing her how to do it step by step because, like this post's title says, it's her first time doing that.

She comes by it honestly though.  In the Philippines, Hallowe'en is observed but not too many people are so enthusiastic about that holiday.  The bigger celebration they prefer is on November 1 called All Souls Day.  It is on that day that they visit the graves of their ancestors.  So, as you can imagine, there are tons of flowers being sold that day. 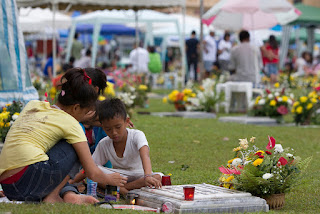 It's a good and noble holiday for sure.  But, we're not here to discuss that.  We're here to have some Hallowe'en fun with a pumpkin, which is what I and my daughter did.  My first step was to make a sketch of what the jack o' lantern's face should be. 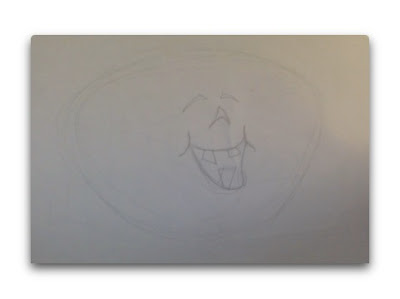 Then came the least fun part of pumpkin carving, scooping out all of the gross insides. 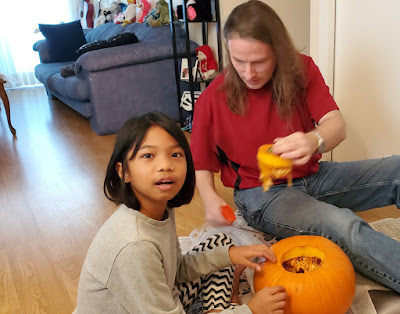 It looks like Jack reverse-vomitted causing all of the puke to be released into his skull.  It feels like it too.  It is the most disgusting and mind-numbingly time consuming part of the whole process.  But, for the carving to go smoothly, this step can not be missed or done half-assed. 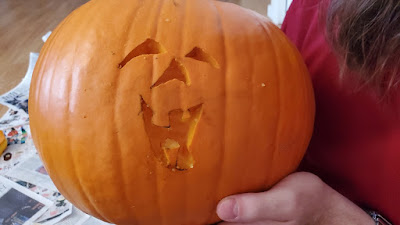 When that arduous task is finally done, it's time to make the face.  I drew the face on first with a pen and then with a marker.  Then I carefully carved out the face with destroying the integrity of the facial features. 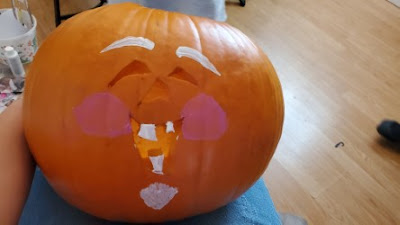 In the next step, it was my daughter's turn to shine.  I had her do some painting in order to fully enhance the face.  I think she did a great job. 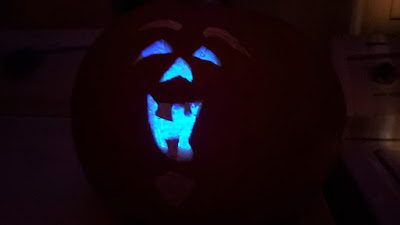 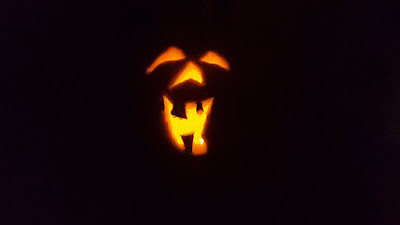 We then tested out what the jack o' lantern would look like at night with a light inside.  As you can see, it looks pretty good no matter what colour light is inside.  Granted this pumpkin is not as "dazzling as the Las Vegas strip" and probably won't win any pumpkin carving contests.  However, for a father-daughter project completed in a little over an hour and one of those people going in completely dark as a first-timer, I'd say we did great.

My wonderful wife documented the whole thing with a video.  She edited it and uploaded it to her Youtube channel.  Yes, I highly recommend you subscribe to it now and tell your friends to do the same.  Enjoy and Happy Hallowe'en!! 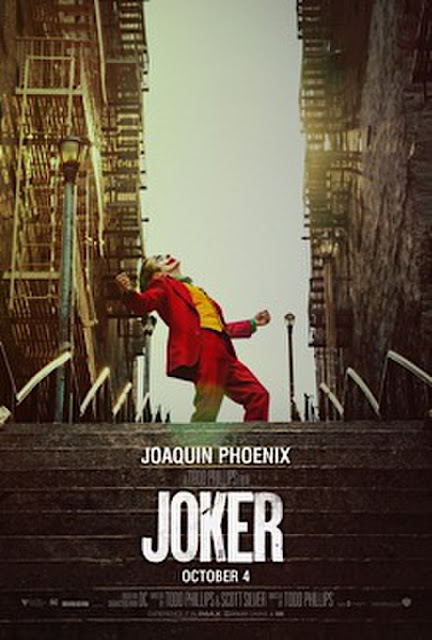 I just got back from seeing one of the more anticipated movies of the year: Joker

I'll give my thoughts on the movie in this blog soon enough.  But first, I'd like to address a little statement that the film's director Todd Phillips made recently. 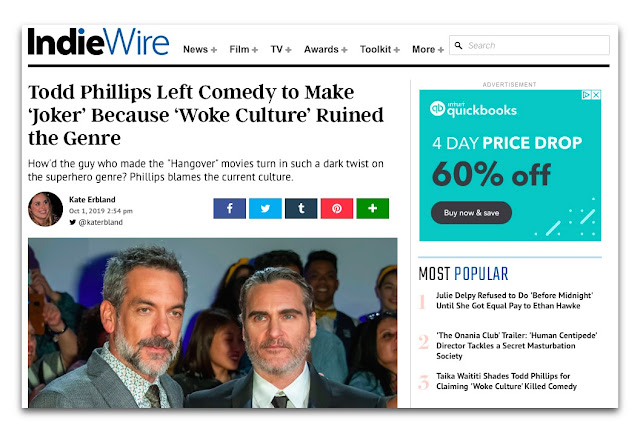 You can read the article here.

I'm somewhat disappointed in what Mr. Phillips said here.  He went about it all wrong. 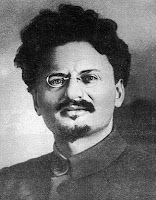 First and foremost, I do agree with him that political correctness is one of the most voracious brain diseases to plague mankind, certainly in this modern era.  The phrase "political correctness" was first coined at a place called the Frankfurt School in 1924 by a weaselly little nebbish named Leon Trotsky.  When he said that phrase, his idea of being correct politically was basically to be just as communist as he was. So there you have it.  This entire pc movement got started because about 100 years ago, some yappy little shit was so marinated in his own hubris that he insisted the entire world should think exactly like he does.  Add to that his willful ignorance or sinister avoidance of his ideology's perpetuation of the deaths of 100s of millions of people and the complete and total loss of freedom, and you have the makings of one of history's most shitheaded pricks.  This unfounded arrogance and willful ignorance are of course still present in the pc culture's loudest pushers to this day.

Todd Phillips was certainly right to speak out against this unfortunate trend.  However, the way he did it was counterproductive in my opinion.  He actually said the words "I CAN'T make comedy anymore BECAUSE of [what he called] the woke culture".  He's pretty much rolling over, exposing his jugular vein and letting all of these "woke" scolds make them his bitch.  This assertion that he CAN'T do something because of them gives them way too much power.  He also says something like "how can you argue against 70 million people on Twitter?"  Well, for one thing, you don't do that whether that number is 70 billion or less than 7.  If you're the creator of some artwork, be it a full movie, a graphic novel, a broadway play, or even a simple tweet that had some planning involved, it is an exhausting and pointless endeavour to argue the merits of your work with packs of braying jackals who don't care who you are and just want to take pleasure in getting you flustered.
Mr. Phillips, when you seem to be getting endless comments about your work being "problematic" or any other such spillage of verbal masturbation, you need to keep yourself above that rabble.  You've just got to say...

Although, I think Mr. Phillips' fear is not just that of the social media mobs.  It's quite possible that he's getting similar pressure from producers and executives in Hollywood who are insisting that he try to appease the Twitter mobs.  Tim Allen said the climate in 'tinsel town' these days resembles nazi Germany.  I'm sure that was just exaggeration of course, but it certainly reflects the vibes he gets being there.  If Phillips is working in this kind of an atmosphere, then I wish him all the best of luck and good wishes.  Hollywood managed to survive all through the McCarthy era, it can survive this equally stifling era too.
I certainly intend to keep raging against all of this with my Censor Monkeys... 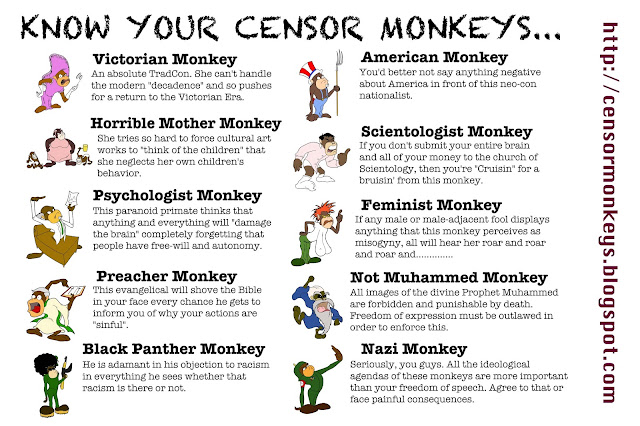 ...and/or any other projects I plan to work on in the near future.  I've already had one critique of these monkeys telling me to change things in order to appease the mobs.  I blogged about it a few years ago here.  So, I can sympathize.
With some perseverance, we can all get through this passing of moral panic authoritarianism together.

Ok, so that's out of the way.  Now on to the review of the movie.

(I'm not going to put any big spoilers in this review for the simple reason that this movie needs to be seen with fresh eyes to fully appreciate it.  It would diminish the full experience if, at any part of watching this movie, you regarded it as "oh yeah, I read about that" or "my friend told me about this part".  You need to not expect any of the events that unfold.  They need to surprise and shock you.  If you follow this advice, you will have a much more thrilling theatre experience) 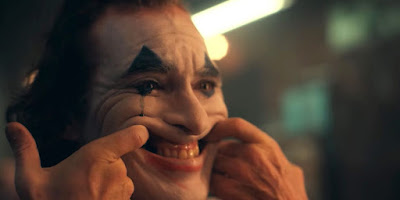 First things first.  Joaquin Phoenix did an amazing performance.  At first he's presented as a Pagliacci figure, the clown that appears happy but is soul crushingly sad on the inside.  But from that point on, things get, as Heath Ledger's Joker said, serious.  We delve into the Joker's psyche and over time we see why he became so crazy.  To not spoil anything, it was a combination of past childhood trauma and the perils of living in a big city. 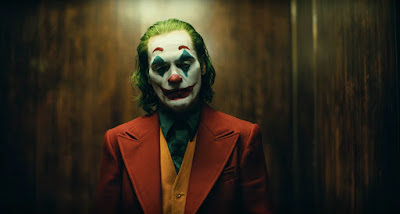 It's too easy just to dismiss this character as an "incel" as so many pundits have done already.  Like I said, this guy has many many psychological problems.  Lack of an active sex life is way far down on his list of concerns.  For him it's hard enough to just hold down a job or even just make it back home without getting harassed or beat up.  Like most comic book stories since their inception, this one is holding up a mirror to society and showing everyone just how ugly it can be.  That could be why so many people in the media are scared of it. 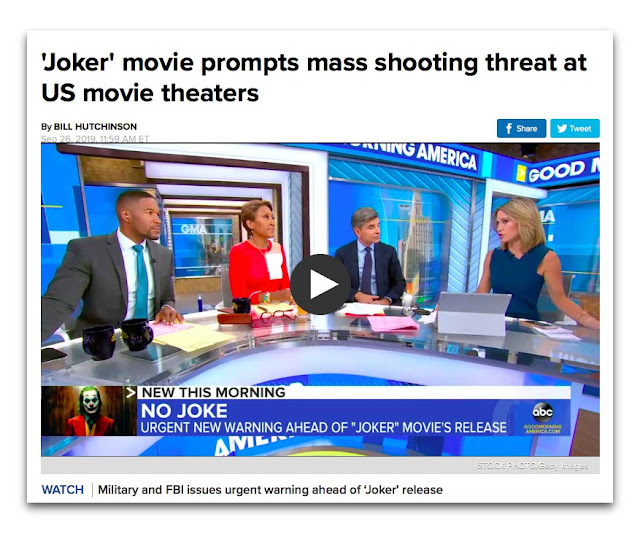 They keep trying to scare the public into fearing a shooting spree at any theatre where Joker is showing, even to the point of having the military and FBI involved.  Too many powerful people do NOT want you to see this movie.  They are desperate to keep as many eyeballs and eardrums away from it as possible.  They're citing that old news story of James Whatshisface shooting up a theatre where that other Batman flick The Dark Knight Rises was playing back in 2012.
Anyone with a functioning brain can see right through this crock o shit fear mongering.  Everyone knows that James' rampage had nothing to do with Batman.  He had problems that only the most professional and experienced psychiatrists can handle.  Nobody will watch this Joker movie and say "Oh HuRr DuRr JoKeR mAkEs ViOlEnCe LoOk FuN".  That's not how being inspired to commit violence works.  The power people who run the media know full well that this movie's message is an indictment of them and a damn good and powerful one at that.  Just their attempts to suppress it alone should be reason enough to go see this movie any and every chance you get.  Don't let them control you or keep you afraid.

Hell, the manner in which the media is carrying on you'd think this was a two hour Marilyn Manson video or something.  Remember the fear mongering around that guy?  Wasn't that just fucking stupid?
When I was in that theatre, I saw absolutely no potential maniacs preparing to shoot up the place.  All I saw were either couples on dates or groups of friends enjoying a movie, which is how pretty much everyone has enjoyed movies since they began.  No theatre staff took any extra precautions either.  In short, fun was had by all.

Regardless of what one thinks of Todd Phillips, he made an amazing piece of cinema here.  I urge all to see it and I wish him success in all of his future endeavours.  Peace out and keep smiling. 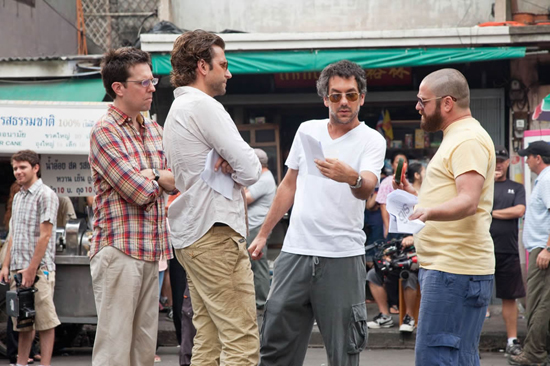 Posted by David Germain at 11:16 PM No comments: Links to this post