I have been a fan of Weird Al's since I can remember. He has truly raised musical parody to an artform (if I may be so pretentious). I even saw his only cinematic opus UHF in the theatres with this sister of mine back when it first came out while my mom and my other sister went to see When Harry Met Sally. Personally, I think we got the better deal. Although, I and this sister did get to see him live in concert back in 1995 so she didn't completely miss out. 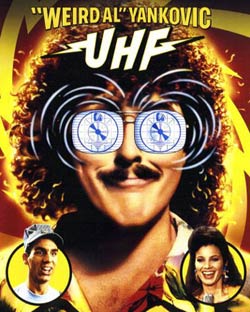 So, as you can guess, I'm pretty happy that he's coming out with a new album. Some of those songs can be heard on Weird Al's Myspace accout. Also, a video for one of those songs is animated by Bill Plympton and another one is done by John Kricfalusi. More bands and/or singers should hire animators to do their videos. We would all be richer both financially and spiritually for it. Incidently, his new album will be in stores today. I intend to pick up my copy. 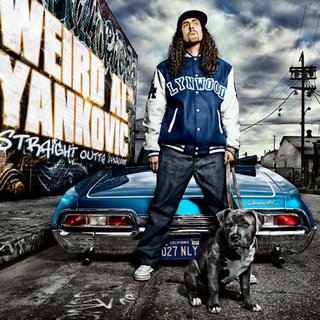 But, I'd also like to address something about Weird Al that I don't think has ever been addressed before by anyone else. His first album came out in 1979. That means that, if you can believe it, Weird Al has been eligible for induction into the Rock 'n' Roll Hall of Fame for 2 years now. Yes, I know there are many people out there who subscribe to that Madonna mentality of "Oh it's just parody." JUST PARODY???!!! I have news for you, parody rules the world ladies and gentlemen. It is the best indication that a Democracy is working. We all have a right to either roast something we cherish or rage against something we are opposed to. Parody is an essential byproduct of that type of Freedom of Speech and noone understands that or demonstrates it better than Weird Al.

No, Al is not in the same category as say The Beatles who spawned many many bands trying to achieve their style. Al, on the other hand, is an anomoly unto himself which would be impossible to duplicate. Unfortunately, this trait also makes it harder for people to truly see the impact he has made on the musical landscape. But, believe me he has. I'm sure the many rock/pop/rap musicians he's met throughout his career can and will more than back me up on that point.

So, whether this has been said before or not I'm saying it anyway. I hereby submit one nomination for the consideration of Weird Al Yankovic for induction into the Rock 'n' Roll Hall of Fame. Rather than go on and on about his career, I'll instead show this video of his. It's a Devo inspired romp that contains a mantra we should all live by: 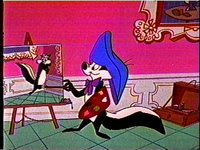 I can't believe I missed it. I'm one whole day late in celebrating the birthday of the man who inspired me to persue animation in the first place, the great Chuck Jones. He would have been 94 yesterday had he survived that bit with pneumonia a few years ago. 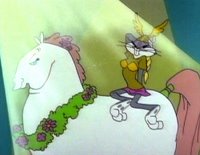 Yes, I do indeed wish that all the denizens of the original Termite Terrace had been cast under a magic spell of some kind that would prevent them from dying so that they could contribute their artistic expertise unto many many generations. Chuck Jones himself could incorporate more artistry in one facial expression of Wile E. Coyote than most animators put into their entire filmography (or, more accurately, Wile E. contains more artistry than most animators are allowed to put into their filmographies. Executives don't like expressiveness for some reason).

Anyway, Mr. Jones, thank you for being great and providing the animation industry with a legacy that inspires us all to do better. 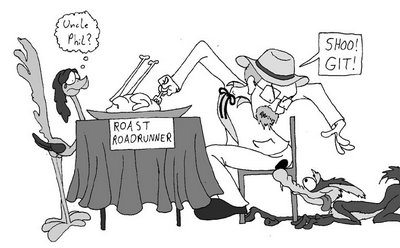 A shout out to the fans

As regular viewers of this blog can see, I put a map of the world along the side. This allows me to see exactly where the traffic is coming from and how frequently. I love looking at all those little red dots. It makes a blogger feel appreciated.

Upon analysis of the map, I notice that most of the hits have come from in and around the New York area. I'm glad that many citizens of the Big Apple take time out of their days to visit this little corner of the internet. So, to all those kind souls, this next picture is for you. 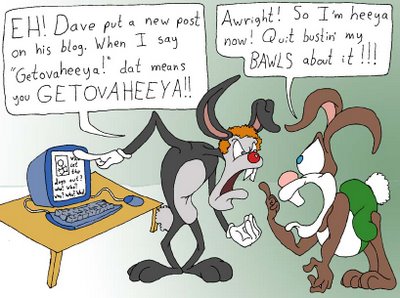 I also see plenty of red dots over in Europe. They're present in every country except for one: France. Well, there's that one red dot up top but it's so close to Belgium that I think that it might even be in Belgium.

So.................... what's the story France? Why are you holding out on me? I thought France was the country that appreciated art and culture and all that good stuff. What's going on over there? I mean, I can understand a bunch of those African countries not visiting. How much internet activity is there in Africa even? And the Middle East, well, let's not go there. (Seriously, let's actually not go there, you could get injured or something). But, France, there's no excuse for you guys. What's keeping you away from my blog exactly? 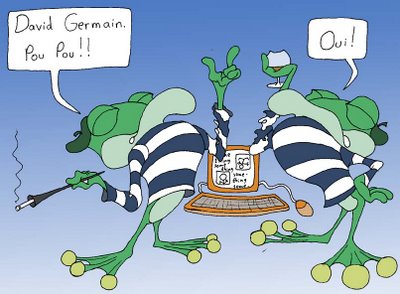 Oh well. I guess you guys are busy doing other stuff. Visit whenever you like. I'm not taking this blog down any time soon.

Oh yeah, if anyone reading this lives in a region that I didn't mention but gives this blog of mine much traffic, I meant no disrespect. Feel free to say where you are (not your specific street address though, that would be a silly thing to post online) and how much you like this blog (or whatever you do when looking at one of my many posts).
Posted by David Germain at 2:55 AM No comments:

I did something different with their birthday wishes. Here, I present their worst nightmares so that the rest of their days will seem great by comparison no matter what happened to them that day. A rather nice gesture on my part I should say. 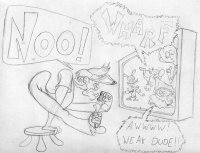 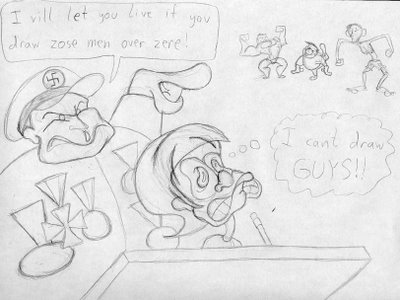 She has to draw guys!!

I hope these pictures brighten their days and make their birthday seasons a merry one.
Posted by David Germain at 12:13 PM 1 comment:

There's going to be a lot of TV shows, radio broadcasts, and blog posts dedicated to the 5th anniversary of 9/11 today. This blog post is one of them.

When I first saw the event take place at the time, my first inspiration was to make an animated film about it. I was just starting my second year of animation school at the time so I had the facilities as well as a relative ability to do so. So that's exactly what I did inbetween school assignments. By the summer of 2002 it was done.

The film I made resembled a commercial for an upcoming sitcom for NBC called Who's the Shah? starring Osama bin Laden, Aman al-Zawahiri, and of course Conrad Bain as Mr. Drummond who adopts them. I would love to put a copy of this film online so that I could link it to this blog and show it to the world. I especially would have loved to do that today for sure. Unfortunately, the file is corrupt or invalid somehow. Oh well, I know of another occasion coming up down the road where I could post it. Hopefully I can find a way to uncorrupt my film and get it online for all you good people. But for now, I'll have to leave you with this graphic. Enjoy! 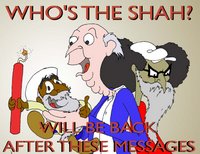 Posted by David Germain at 7:41 AM No comments: 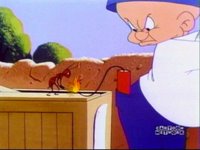 I'd like to take some time and bandwidth to talk about an underreated classic Ant Pasted. Not only is it a well executed cartoon with impeccible timing that only Friz Freleng could achieve, there's something below the surface as well. It is also a scathing attack upon Senator Joe McCarthy and his Un-American Activities Committee stuff. Here's what I've noticed:

Joe McCarthy is represented by Elmer Fudd (who better to do so?). The fireworks Elmer lights and throws around represent the extreme patriotism that McCarthy and senators like him (then, now, and at any other time in political history) shamelessly display in order to feel righteous. The ants here represent those that were victimized and blacklisted by all this.

Unfortunately, in real life, the blacklisted individuals were at the mercy of this committee and all they could do was wait it out and survive however thye could. Some even committed suicide. But, the victimized ants in this cartoon actually retaliate, something I'm sure Freleng and everyone who was blacklisted wished they would have done.

If you're thinking that all this is no big deal, keep in mind that this cartoon came out in 1953. The blacklist was in full swing at this time. Any little insignificant part of your past that could even be remotely construed as being linked to Communism got you in front of that committee pleading your case in front of a group of cold heratless suits ready to find you guilty no matter what. So, for Friz to actually slam these guys through animation or whatever is quite a bold move indeed. Thankfully, I don't think Joe McCarthy ever caught on because Friz disguised his attack with a blanket of patriotism. He made the ant's retaliation seem like it was being done for America. And in a sense it was. Those Communist hearings were a dark period in American history. The sooner those ended the sooner America could seem more like a police state run by tyrants.

Well, I think I've said enough about this cartoon. I now invite all who have read this to view the cartoon for yourself and see if you agree with me or not. So, with that, I now present Ant Pasted:

Posted by David Germain at 9:29 PM No comments: