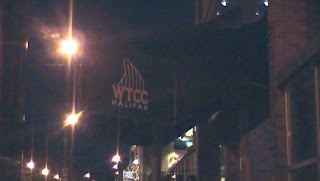 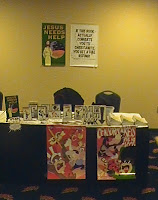 As of 6:00 p.m. on October 28, Hal Con 2012 is now a piece of history that I am proud to have been a part of.  I blogged about my experience at Hal Con last year.  This year was just as exciting, memorable and profitable.  I sold so many books that at the end I only had one left.  Thanks to all who stopped by my table and made a purchase.
You can see my display table on the left over there.  That poster I have that reads "IF THIS BOOK ACTUALLY CONVERTS YOU TO CHRISTIANITY YOU GET A FULL REFUND (baptismal certificate required)" got just as much of a positive response as it did last year.  That poster was a good idea.  Of course, it only works on people with an intelligent and well-developed sense of humour, which leaves out flea markets. 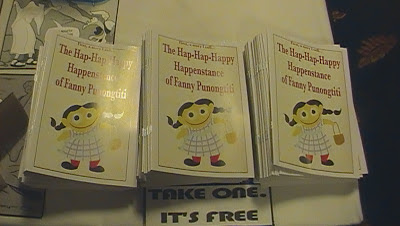 I'd also like to give a nice big thanks to anyone who took a free copy of my mini comic The Hap-Hap-Happy Happenstance of Fanny Punongtiti and showed it around to everyone.  Any publicity helps.

Speaking of which, no I was NOT asked to leave this convention at any time just like I talked about at the Zine Fair the week before.  In fact, I received absolutely no complaints about the contents whatsoever.  Most people either said "this is awesome" or "this is hilarious".  Comic Con people are good people.  The only complaint I got (if you can even call it that) was when one guy looked at my Jesus Needs Help comic and remarked, "$7.50 for that???"  I think the common credo is there's no haggling at Hal Con.  That's true no matter what this guy says: 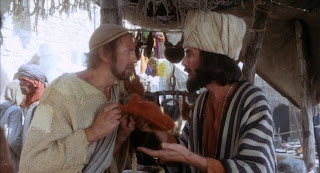 Of course, besides the comics and other various merchandise to buy, the other main attraction of comic cons is people's costumes.  I certainly saw plenty of those, of all various kinds.  I couldn't get around to see much because I had to stay at my table the whole time.  I was table 17 in the Artist's Alley over flow:

But, from my little space of the convention, I took as many pictures of people's costumes as I could.  Looking at all of them, I came to notice that girls' costumes tend to fall into 3 categories:

Of course, #2 easy overlaps into either #1 or #3.  You can look through the pictures below and decide for yourselves which category each costume falls into.  I couldn't quite pinpoint the categories of costumes that guy's wear.  I'm sure it's somewhat similar but not quite.  Maybe some members of the female gender reading this could offer any observations from their perspective.  That would be most helpful.  (Please forgive me if I don't give the right name to some of the costumes.  Not all of them are as familiar to me as should be I'm sure.  Keep that in mind as you scroll through this.)  Anyway, let the costume parade begin:

Also, on Friday, a man stopped by my table promoting his heavy metal band.  It's called Skipp Purgatory.  I do believe he even bought a copy my book Jesus Needs Help thinking that it would go good with his band's atmosphere.  And it does.  You can check them out online right here.  True to their word, they rock! 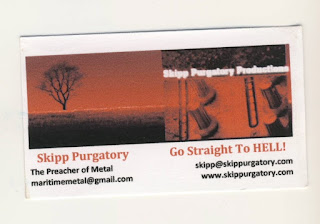 Speaking of cute couples, my good friend and fellow artist Stephanie had a table just 5 spots down from me.  You can see her art on her blog right here.  Go there and give her some traffic.  Leave a comment or two even.  She shared that table with her good friend Tony who also has a blog full of art work looking at over here.  Here they are as they looked selling their wares at Hal Con: 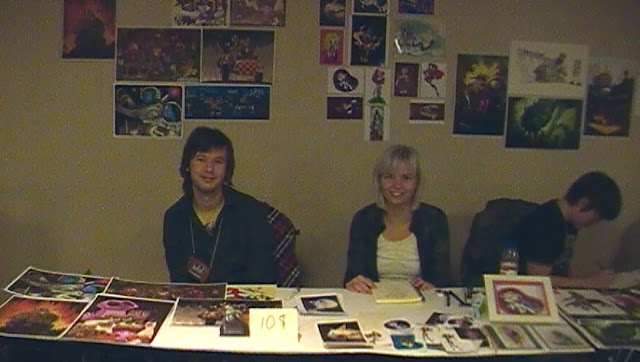 And for just 2 dollars, I purchased this great art piece from Stephanie. 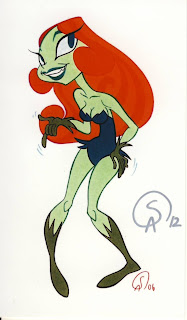 It's a drawing of Poison Ivy doing some kind of jazzy dance.  She autographed it even.  Thank you to everyone who went to their table and bought something.

Well, that's all of the costumes I managed to photograph while I was there.  There were many others worth a look.  if you want to see these and more, you'll have to come next year.

Oh, before I end this post, I'd like to promote some of the businesses whose cards I obtained at the Con. 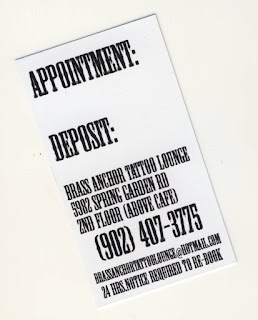 I sat beside the Brass Anchor and managed to get one of their cards.  If you're in Halifax and you want a tattoo done, go to their business.  They'll do good work for you.  I also sat beside ChiZine Publications.  They didn't have any cards to give out so I'll have to post a link to their website. 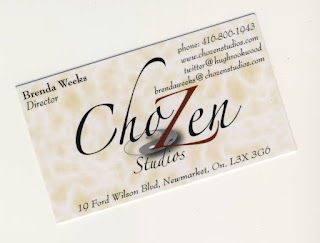 Chozen Studios.  They will rock your world with their greatness. 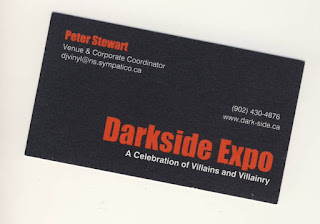 Apparently, the Darkside Expo had fallen onto some rough times due to reasons beyond anyone's control.  But, they are now up and running again.  So, definitely check them out.

And also, I bought a wonder book called Kill Shakespeare. 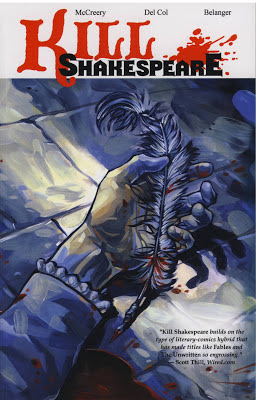 It's a graphic novel inwhich various artists and writers take many of Shakespeare's plays and put their own creative spin on them.  It's a very inspired concept really.  I had the good fortune of sitting beside their table at the Montreal Comic Con last year.  One of the guys even autographed it for me when I bought it.  Check it out: 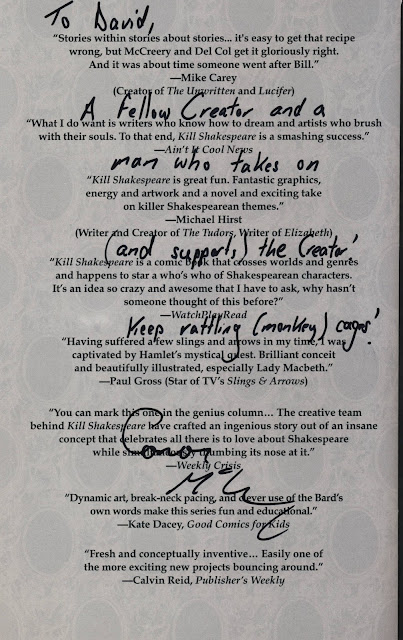