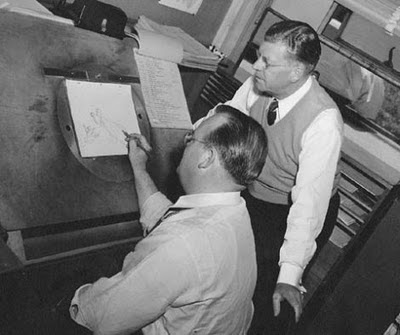 If you guessed Tex Avery................. YOU'RE ABSOLUTELY 100% CORRECT!!!!!
(If you guessed somebody else, just.............. go away)
Yep, the king of cartoons himself would be 102 years old if he were alive today (and was given a new liver). He'd probably be celebrating today with a small quiet party with any of his surviving colleagues from the animation industry as well as any surviving family members such as his daughter Nancy and any of his fans lucky enough to have associated with him. Many of those fans will have flown all the way over from France even. Such a party would be nice and I'm sure Tex himself would enjoy such a thing. But, being an innovative genius that has helped shape the animation and even the entertainment industry, I think he deserves much more than that.
Something I think is long overdue is a biographical movie made about Tex. Not only would we see how his own style of cartooning developed, we'd see how his own tragic homelife was such a sharp contrast to the comedy he put in his cartoons. He's a quintessential Pagliacci figure. A movie like this could easily be done and could easily do well (if Hollywood executives don't sabotage it somehow.................. on that note, maybe a more independent studio would be a better place to get this made. )
Below is what a movie poster may look like for such a flick. Please forgive me. I wanted to draw a poster but it wasn't really working out and this day of his birth was approaching way too fast, so I hastily slapped together some screen grabs. Anyway, there it is. Maybe I'll draw one later. I'll be unemployed soon which will give me plenty of time. 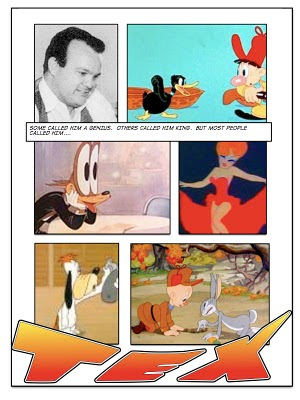 But, y'know, why should I be the only one to do this? I put it to anyone reading this who is also a fan of Tex Avery's work. Make your own poster for a Tex Avery bio pic. I think it would be more appropriate if it was an illustration, but if you do lack confidence in your drawing skills, a few photoshopped images would suffice. Post it on a blog or anywhere else you have access to post images. Who knows, if enough of these posters are made, maybe that will give some people the idea that a Tex Avery movie is a good idea. We'll never know unless we try.

Oh, for those who consider Tex to be some kind of a white supremacist bastard, I found one of his cartoons that definitely violates that. It actually pokes fun at white people and has some race mixing at the end. It's actually a klansmen's nightmare. Watch and enjoy:


Johnny_Smith_and_Poker_Huntas
Uploaded by Daffyduckandthedinosaur. - Full seasons and entire episodes online.
Posted by David Germain at 5:13 AM No comments: Links to this post