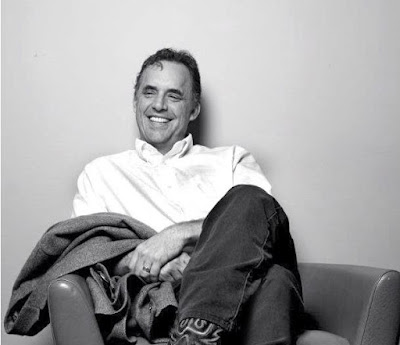 Some time ago on this very blog, I made a post about Jordan Peterson.  It got a certain smattering of attention and it may have cost me a few Facebook friends.  All in all, that was a fun post to make.  I'm making another post about Dr. Peterson now because he is currently touring North America and Europe promoting his bestselling book 12 Rules For Life: An Antidote to Chaos.  He's certainly had capacity crowds full of enthusiastic fans at many of his appearances.  Also, like before and as it is  with anyone who has amassed a certain amount of popularity, there are many who protest his appearances too. I know a venue in Calgary almost cancelled his appearance there because of protests.  I will be talking about one such protest along his tour.  Just like last time, this protest is in the form of a poster.  It reads as follows: 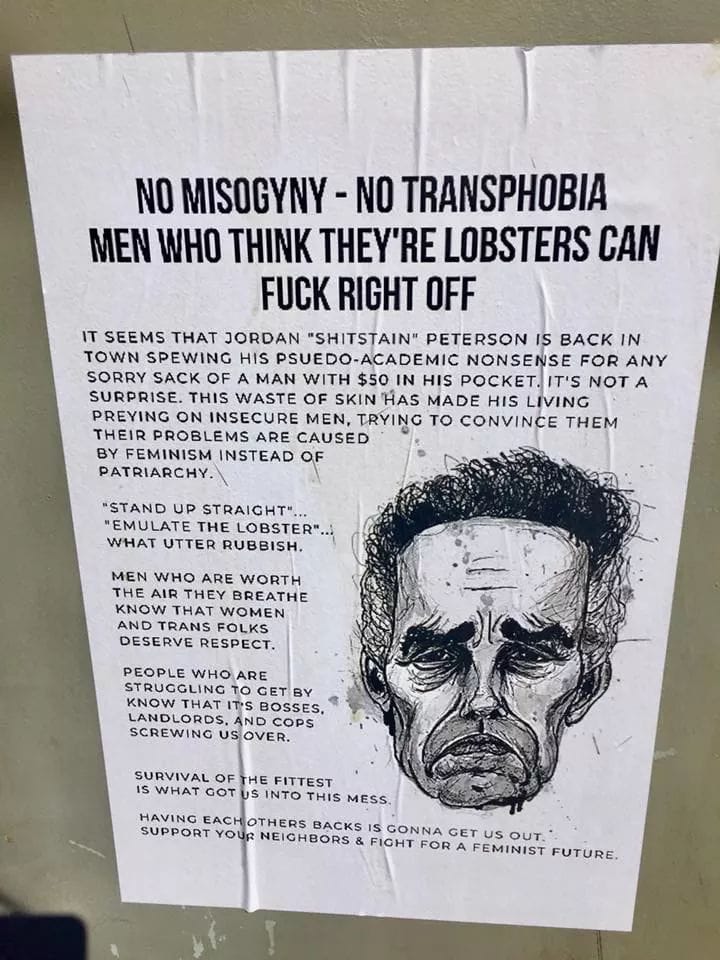 I'll bet this poster was made by the same "cerebral giant" who made that other one I had in my previous post.  It's got that same ball of emotion thinking it's 'grown up logic' kind of style.  So, once again, I will gleefully pick it apart bit by bit to have fun pointing out the rampant absurdities.  This will be fun. 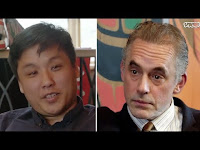 Every argument based on pure emotion always starts with an aggressive straw man.  Dr. Peterson has yet to display any indication of misogyny, transphobia, or............. him identifying as a lobster (Wow! What a stretch that is).   The "misogyny" this poster may be referring to could be from that Vice interview where his comments were blatantly taken out of context in order to create a cheap 'hit job'. He was merely pointing out the differences between men and women and how that affects various workplaces.  He wasn't putting down the very idea of women in the workplace at all. Of course, the "transphobia" refers to his objection to Canada's bill C-16 which would make all the new gender pronouns mandatory to say.  It is of course the MANDATORY part that raised his ire because that qualifies as compelled speech which violates )or at least steps on the toes) of free speech, something both he and I cannot abide.  That "men who think they're lobsters" comment is just too kookoo bananas to deal with so I'll just hold that up for ridicule on it own.

It seems that Jordan “Shitstain” Peterson is back in town spewing his pseudo-academic nonsense for any sorry sack of man with $50 in his pocket.

There are actually more than a few women attending Peterson's venues and they all genuinely agree with him and want to hear what he has to say.  Like it or not, Peterson is not some old Spike TV product that "BY MEN FOR MENNNNNNN!!!" but rather he is just espousing his wisdom to whomever will listen.  He targets no demographic, he just talks and people of all types come from all over.  This wide net that he's managed to cast upon the culture is one of the many reasons for his success.

It’s not a surprise.  This waste of skin has made his living preying on insecure men, trying to convince them their problems are caused by feminism instead of patriarchy. 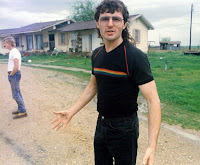 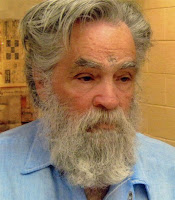 "preying on insecure men". I think the person who put that on the poster is doing some insecure projection of their own.
The more egregious part I'd like to address is at the very end, where this poster claims Peterson says 'problems are caused by feminism instead of patriarchy'.  No, sorry. You cannot dismiss someone's words as "pseudo-academia" using an ideological boogeyman, that being the highly abstract concept of 'patriarchy'.  For the sake of argument, assuming Peterson's words are pseudo-academia, this statement would be like if Charles Manson poked his head into the compound in Waco, Texas where  David Koresh and his cult family lived and said, "Hey, everyone, come live at my ranch instead."  Trying to convince others to abandon their ideology and then submit to your ideology is............. well................. the dictionary definition of crazy, really.  (Before anyone tries to 'catch me in some hypocrisy here, no this blog post is NOT in any way me trying to convince anyone to follow Peterson. It's not my business what anyone does after they finish looking at any of my blog posts. I'm just giving my response to some misinformation is all).

“Stand up straight” “Emulate the lobster” What utter nonsense.

Um............. standing up straight is always good sound advice. Slouching helps nobody.  Also, 'take a lesson from' is not nearly the same as 'emulate'.  For example, the lesson in the Grasshopper and the Ant story is that we should be more like the ant and not like the grasshopper. By being like the ant, the story's author doesn't mean that we should did many intricate tunnels underground and carry foodstuff 50 times our own weight to our queen.  He meant that we should prepare ourselves for life and not frivolously waste our days like the grasshopper did.  All Jordan Peterson wants us to do is take a lesson from how lobsters behave.  If you consider common sense life lessons to be 'utter nonsense', well then............ you must have been born with your brain in backwards or something. I'm not sure how to account for that level of ignorance.

Men who are worth the air they breathe know that women and trans folk deserve respect.

Okay, once again, Jordan Peterson has never once argued against this.  It looks lime there's some more paranoid projection going on resulting in another 'man of straw' materializing.


People who are struggling to get by know that it’s bosses, landlords and cops screwing us over.

Um....................... what? How does this have anything to do with Dr. Peterson's lectures?  If the person who made this poster has a problem with any employer, building superintendent or police officer in the neighbourhood, then those are the people that the poster's author should be approaching with a list of grievances. Leave Peterson out of that, it's way out of his jurisdiction and none of his business.

Survival of the fittest is what got us into this mess.

So.......... you'd rather the gold medal go to the athlete that finished in 12th place or the Oscar be awarded to the actor or actress who gave a bland and forgettable performance that year?  Meritocracy is what makes the world go round. It always works best when the best people for the job get chosen to do that job.  As Lorne Michaels once pointed out when discussing how he hires cast members for Saturday Night Live, "talent is unfair". We can't choose who will be the best person for the job.  It's up to each individual in this world to find their talents and develop them to the best of their abilities so that they can get the jobs they want.  Or, if they sadly fall short of being the best, find a place where their talents can still be of some use whatever level they are at.  That 'survival of the fittest' system is not going away any time soon.

Having each other’s backs is gonna get us out.  Support your neighbours and fight for a feminist future.

A feminist future eh? You really thunk that's going to be some "grand 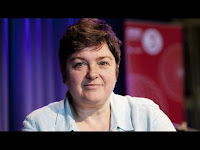 paradise'?  You'd really want to implement Anita Sarkeesian's "Listen and Believe" philosophy, where any time a woman accuses a man of rape we must 100% agree with the woman before any evidence is presented (if ever)?  Do you want to just do away with the rule of law and due process altogether?  Will abandoning justice make for a more just society somehow? How does that work?
Or maybe you'd want to implement the philosophy of another feminist (fucked if I can remember her name) who's bright idea is to round up every man on Earth and put them into "camps" of sorts.  So many people condemning Richard Spencer for his desire to create an 'ethno-state' yet nobody has even batted an eyelash for her proposal for an 'estro-state'.  So a bright future for you is orwellian tyranny, eh? Yeah, I'm going to stick to Jordan Peterson's common sense 12 rules thank you very much, even if it means over-analysing lobsters more than I care to.

Alright, no that bit of fun at an idiot's expense is behind us.  I'll just reiterate that Jordan Peterson is on a tour promoting his new book, a book of which I happily bought. 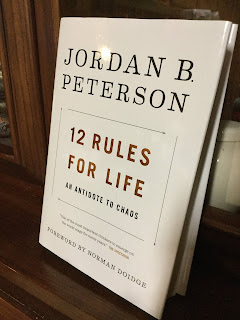 Also, as luck would have it, Dr. Peterson made a stop and gave a lecture in my sleepy little town and I got to go see him.

Before this picture was taken, I handed Dr, Peterson one of the cards I was handing out at the Fan Expo back in May (that got me in just a tiny bit of trouble).  I showed him the side of the card with his image on it first. 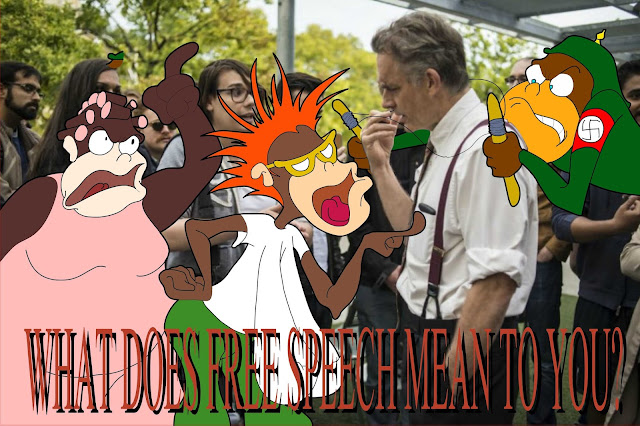 I thought he'd find this at least mildly amusing.  But somehow I don't think he did.  Maybe the Nazi Monkey attacking him with the garrotte was too much for him.  It was indeed a direct reference to that incident in Ottawa where a crazed woman almost did that very thing.  My card was definitely a satirical swipe at his critics, not at him.  I was hoping he'd read the other side of the card and see what he thought of that. 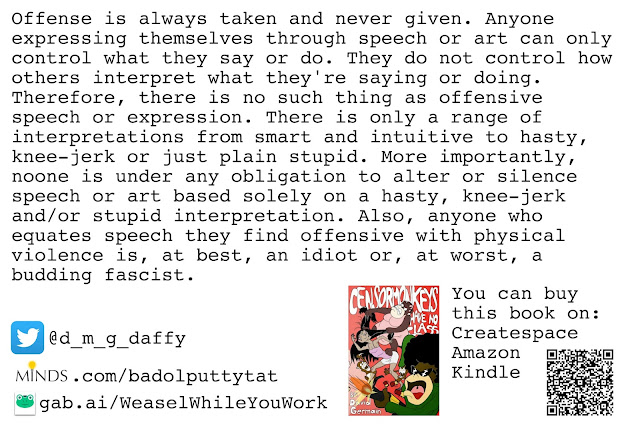 Ah well.  Making this card the way I did was my presentation choice so I must take full responsibility for how Dr. Peterson received it.  It was not my intention to rattle or irk the man, but what's done is done.  I'd like to take this opportunity to make it up to him.  If he even finds this blog post at any time while surfing the net in his downtime, I'd like him to see the more pleasant image below. 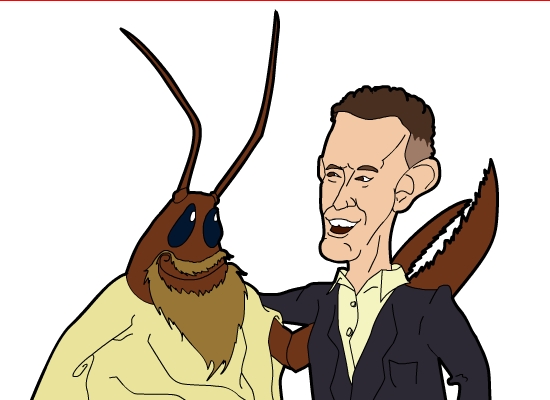 It's a drawing I just did of Dr. Jordan Peterson hanging out with Lobster Jesus.  I hope he finds this a more pleasing image to look at.

Okay, that's the end of this blog post.  You can all go back to your Netflix and chilling or whatever it was you were doing.  And go clean your rooms, buckos!
Posted by David Germain at 2:58 AM