Rod Scribner was born October 10, 1910 and lived until December 21, 1976. Fortunately, within many of the years in that time frame, he created some of the greatest pieces of animation the world has ever seen. 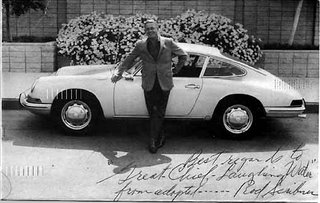 In animation school, I was taught that the line of action is the most important aspect of any drawing. No matter what the character is doing, that line of action, if done well, can make it seem more dynamic. Your eye can't help but follow that line all throughout the drawing. And, with approximately 12 of those drawings coming at you every second, well it's easy to see why cartoons, especially the ones done in the classic style, have the power to overwhelm an audience. Well, the line of action in Rod's drawings was so fast that it could not be registered by the human eye. So, just take the energy of a regular cartoon (and I mean a GOOD cartoon, none of this bland Psychological Realism nonsense from Chris Landreth or tracing live action footage like Richard Linklater or any horrible Saturday Morning factory product) and then multiply that by 1000 and you get something that's "off-the-charts" incredible. John Kricfalusi (creator of Ren & Stimpy) sites him as an influence and you can see that throughout his work.

Rod Scribner's greatest animation can be seen in Bob Clampett's work at Warner Bros. from Wabbit Twouble (c. 1941) to The Big Snooze (c. 1946). One great scene in particular is in Coal Black and de Sebben Dwarves (c. 1943) when Prince Cawmin' is giving Coal Black his special "rosebud" kiss to revive her. You can see him trying to give her the best kiss ever and more importantly you can feel it. He's not just giving his lips a workout, he's putting his whole body into it. From his head all the way down to his toes, it looks like Princy is trying to smush his entire body onto her mouth. Truly breathtaking (literally for the Prince). Also check out his animation in Corny Concerto (c. 1943) when the mother swan first discovers that her sygnets are missing. Scibner did a fantastic job emphasizing the panic she feels as she looks everywhere for them in time to the music. After she faints, he even put some vibrant energy into the duck who tries to revive her with a bucket of water. His whereabouts from 1946 to 1950 is unknown (at least by me anyway), but he did resurface at Warners in Robert McKimson's unit. There he carried on with his own unique animation style. It can be scene in such cartoons as Pop'Im, Pop (c. 1950). Check out the scene where Sylvester tries to shove Hippety Hopper into a tool shed. With each thrust you can feel Sylvester using all his weight on Hippety. Another great example is in Little Boy Boo (c. 1954). Watch the scene where Foghorn Leghorn pitches a baseball to Eggbert Jr. Aaron Small should have such a pitching arm. Rod left Warner's during the brief shutdown period of the studio in 1954. His work later pops up in Jay Ward cartoons. One inparticular that stands out is the opening sequnce of George of the Jungle inwhich George is encased upsidedown in that giant flower while the stamen and the pistal spank his bottom. He would then work with other former WB animators on the groundbreaking Bakshi opus Fritz the Cat. His last work would be for his old WB companion J.C. Melendez on Race For Your Life, Charlie Brown. He died before that came out.

Well, that's quite a bit about his work. Now about the man himself. Some have called him an eccentric. Others called him completely insane. I wasn't sure what to think until I received an email about him approximately 2 years ago. Here's how it read:

I met Rod in Malibu way back in 1968....just shortly after I moved there with my
parents. His son Ty I had befriended on the beach at Paradise Cove...Ty lived
with his mother
(they were divorced) in Glendale ...so he was only around on the weekends and
mostly thru the summer months. Rod lived alone so I hung out with him as often
as I could...cruised up and down the Pacific Coast Highway with him in his
Porsche and listened to stories about some of his work. Rod taught me how to
drive a stick shift, and was very attached to his silver 1967 Porsche 912. The
photo was
used by the dealership (I think it was Masterson Motors Pasadena) ...thats not
his Porsche in the photo..just one they
had for the photo with Rod endorsing their dealership.


His mobile home (Paradise Cove was a larger trailer park) was filled with boxes
of cells from his recent project, like Barrie he also had a studio set up,
at that time he had recently finished a commercial for American Motors (showed
large numbers of imported cars riding surfboard onto US beaches) and he was very
proud of it.
Rod Scribner, Barrie Nelson, and Bill Melendez were all neighbors ...Melendez
used the place as a weekend retreat
from his Peanuts work...Barrie had his studio in his mobile home and so it was
the usual thing to gather at Barries
with Rod and see what was going on.

Yes..Rod was taken away...once while I was there. Neighbors told me the Malibu
Sheriff's had taken him in ..I went to the old jail to try to see him but was
turned away they refused to
take his glasses I had brought said they were holding him because he was a
suicide risk...he ultimatly ended up at
Patton State Hospital (65 miles east of Los Angeles) shortly after he was sent
away..I was in a serious automobile accident
and even though Rod had his own personal problems to resolve..he wrote to me to
cheer me through my own lengthly
recovery process. Try to remember in this era...anyone displaying any unusal
behavior could be placed into a mental
hospital..often with only the say so of a police officer.

I never felt or thought that Rod was crazy...he was lonely
and missed his family and had been forced into post divorce seclusion at what
had been their summer residence. If you didn't know him I am sure he fit the
'profile' of an eccentric...and an artist to be sure.

By the time I was released from the hospital..and then some many months of
physical therapy to be able to get around on my own again, I had lost contact
with Rod. I graduated from
Santa Monica HS in 1970, married in 1972 and moved to North Hollywood. Rod
passed away in 1976 while I was living in Santa Barbara so I don't have any
other details of those last few years of his life.

Rod wasn't crazy..he was just marching to a different drummer
a devoted and talented (if not misunderstood) artist.

Here's that get well card they sent me. Dave Berry, wherever you are, thank you. 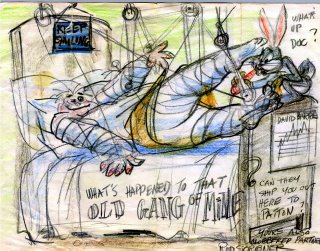 Well, what more can I say about that animator extraordinaire Rod Scribner? Well really, no more SHOULD be said. If a picture is worth a thousand words then one of Scribner's pictures is worth a thousand pictures. Check out any piece of animation with his name in the credits if you want to learn more about him. There's no better way to do that.
Posted by David Germain at 1:17 AM